When first acquired, there was considerable damage to damper felts and key cloth due to moth larvae; that material was totally replaced and the action “made playable” to assess the overall quality of the piano.  Amazingly everything was original and working!  After enjoying the piano for several years I decided to rebuild the instrument.  The pictures following shows various aspects of the piano before and during rebuilding.

Above:  looking at the bass bridge, showing how the lowest single strings have felt wrapped around the wire as it passes over the bridge.  The bi-chords are resting on black cloth at the crest of the bridge. 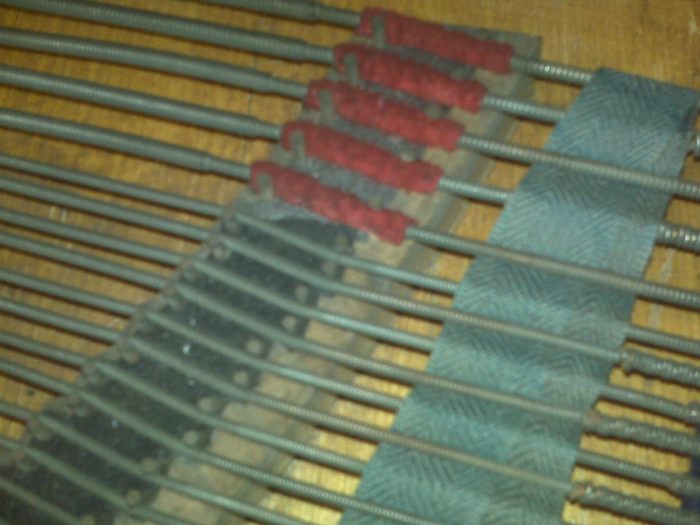 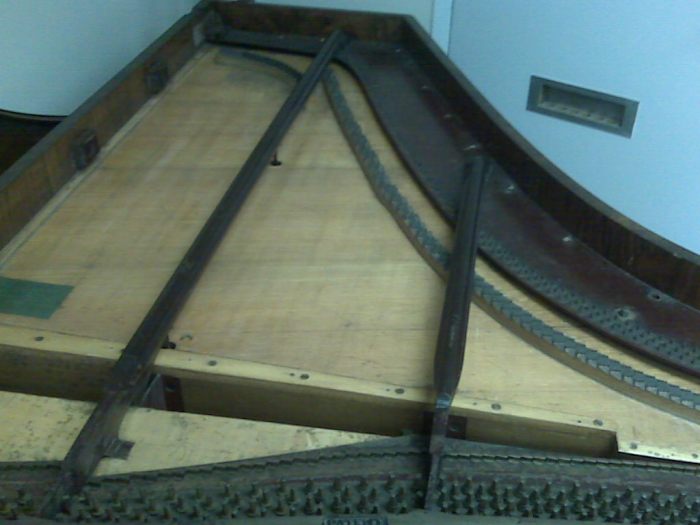 A view with all strings removed.

Broadwood pianos of this age featured sectional plates, or in their terms a “bolted iron frame” – a tailpiece along the bent side, with struts (bars) running the length of the piano to support the pull of the wires.  The struts are fitted into the tailpiece and secured by a block.

At the front end, the struts fit neatly into the front plate and are secured to the nosebolts by steel pins.

Directly below this strut you can see one of the two spreaders that “mind the gap” between the pin block and the belly rail, a carry-over from their days of building harpsichords, transferring the load applied through the pin block directly to the wooden framing members running below the sound board.

Another unique Broadwood feature of that era – the plate above the pin block is threaded to fit the tuning pin threads! Each tuning pin had a cloth washer between the plate and strings to keep dirt out of the threads.

A “Notice to Tuners” label informing tuners how to deal with the threaded plate.

After removing the tailpiece it is time to clean the soundboard 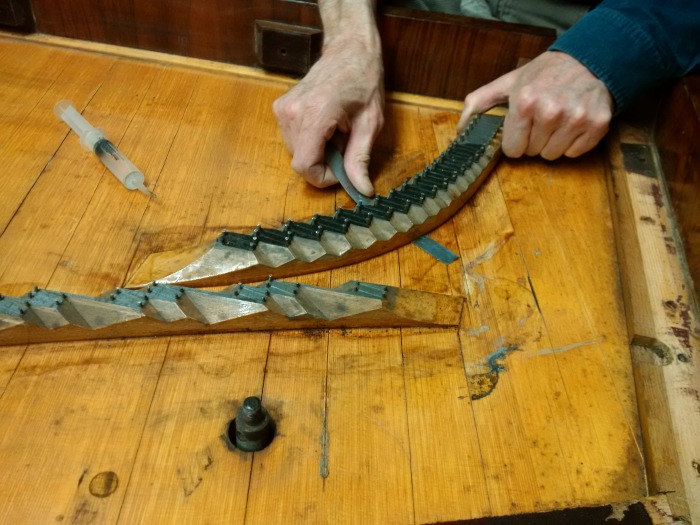 Removing the bridges allows for easier and more thorough repair to the sound board.

One last hidden screw from below must be removed before the bridge is finally off!

When rebuilding, one has to make many decisions, the most common question that arises is to either repair or replace components.  In general, parts that have major signs of wear such as cloth, felt or leather can and should be replaced.  Larger items such as hammers, pin blocks, tuning pins and strings are almost always replaced as well.  The largest single wooden component of the piano, the soundboard, can also be replaced and often is.  The deciding factor is the presence or absence of crown, the curvature of the soundboard which works against the downward strain of the strings.  Usually in older pianos this curvature or crown is absent due to the shrinkage of the wood, which then renders the soundboard “lifeless” – unable to properly respond to the transfer of the sound vibrations from the strings.  In the case of this piano, there still was some crown present so we decided to repair the soundboard instead of replacing with a new quality soundboard. 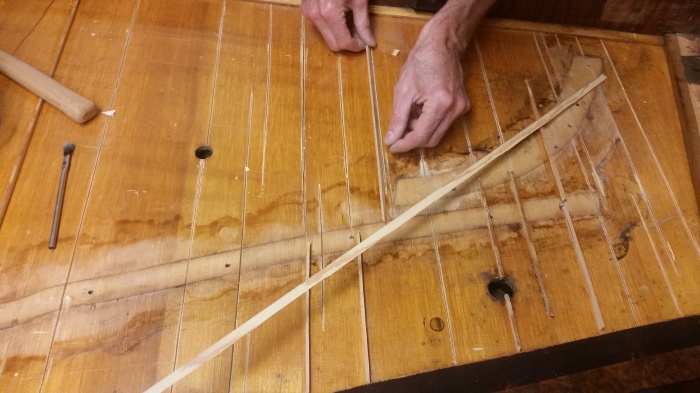 Starting the soundboard repair: first cut tapered grooves in the soundboard along the cracks, then carefully fit shims made from soundboard spruce, gluing in place with the original style fish glue. 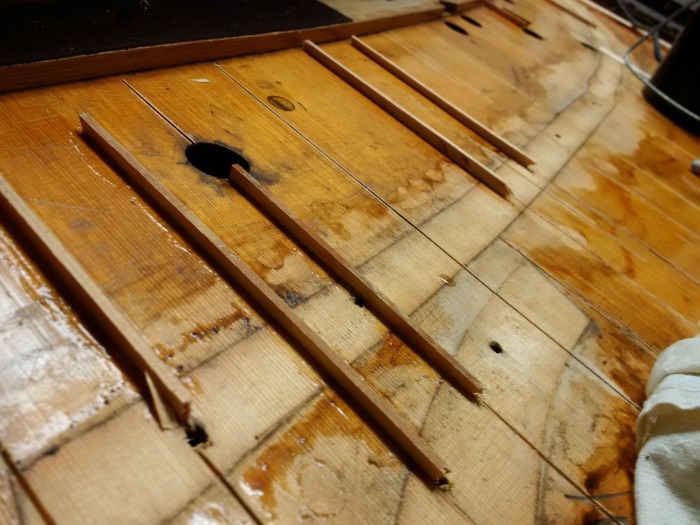 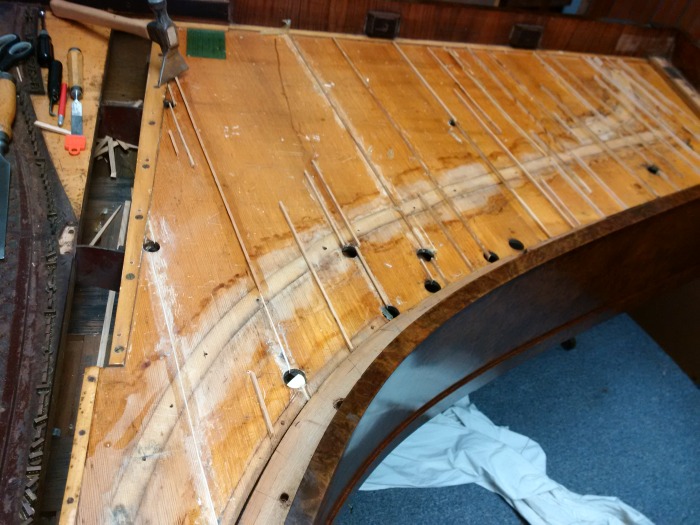 Finally, all the cracks are now shimmed 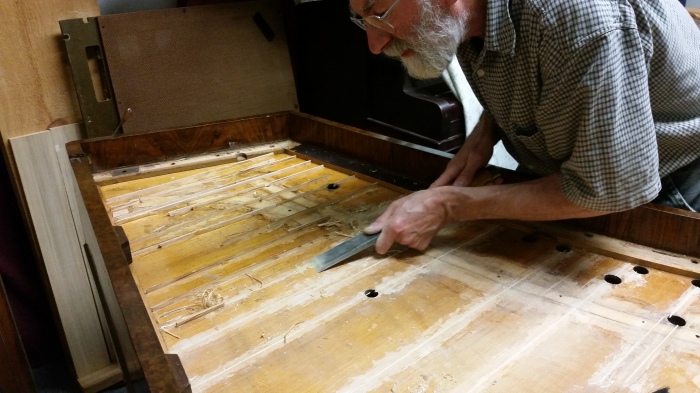 Soundboard shims trimmed and the old finish scraped off 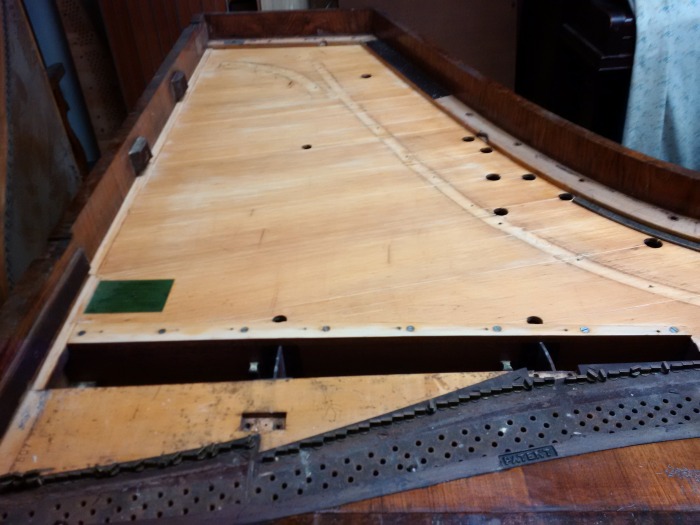 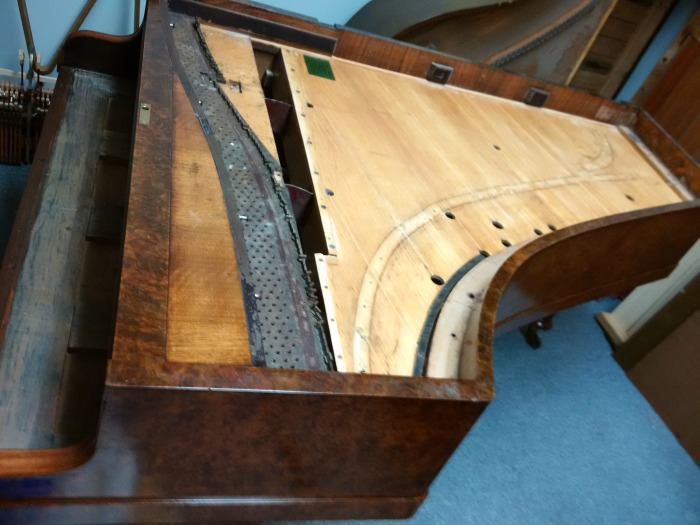 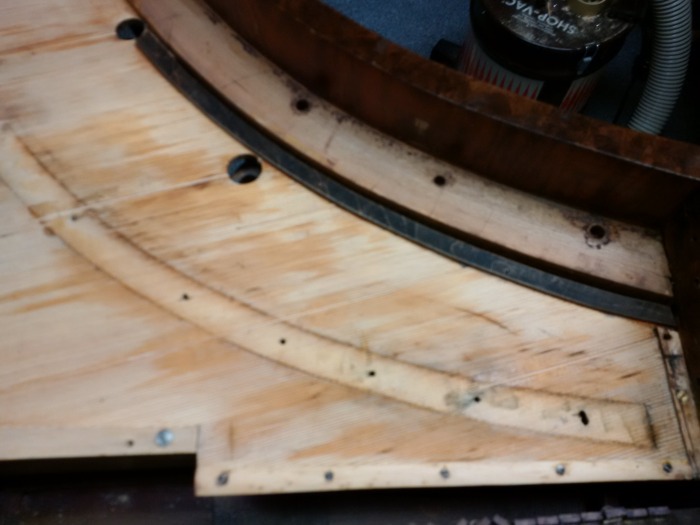 Beyond the high treble bridge the soundboard is not fastened to the rim but has a “semi-reflective termination”, (see the very dark-stained curved piece) in this instance two thin layers of maple.  Broadwood commissioned scientific research in the field of acoustics, and the results were applied to their products.  More on that later!

Turning our attention to the underside, the soundboard and framing are cleaned and varnished.  The bent side is solid oak, steamed into shape, whereas the long straight side is solid mahogany.

A close-up of the low tenor area of the bridge, showing Broadwood’s careful calculations to even-out the wire tensions as the gauges change.  This is a result of scientific research commissioned by Broadwood, and by their collaboration with the esteemed scientist Hermann von Helmholtz, who published “On The Sensations Of Tone” (1863), the seminal work on the acoustics of music. 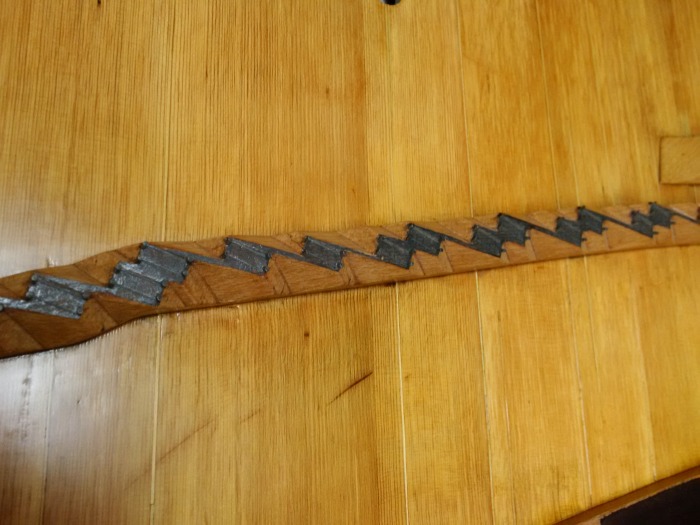 Another look at the steps on the bridge, showing where the change of gauge takes place. 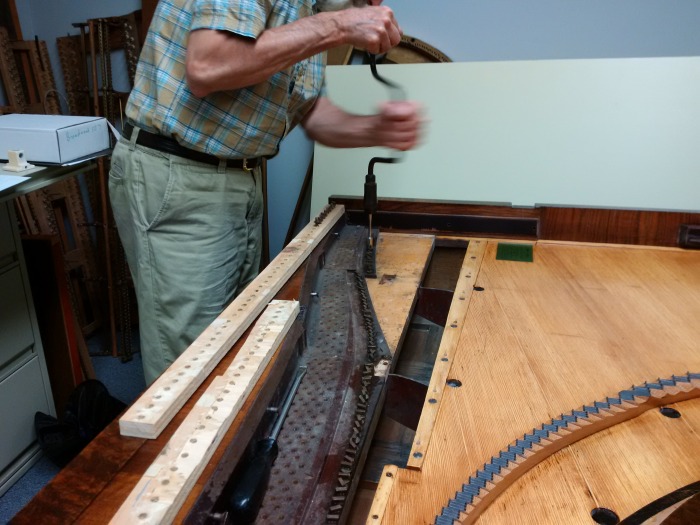 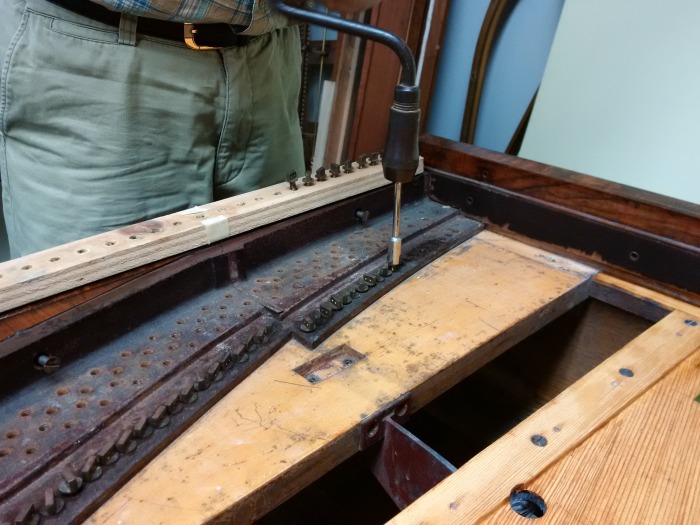 Each agraffe is unique and will be kept in their order.  The agraffes are screwed through the plate and into the underlying pin block.  Broadwood had their own unique thread on agraffes, 26 threads per inch, so extreme care was taken removing them since modern agraffes would not fit.

With the last part of the cast iron plate components removed, the string plate, we see the pin block, although a heavy card stock still covers the area beneath the plate.

A photo-op for all the cast iron pieces comprising the “bolted iron frame”.  In a modern piano this is cast as one piece and usually given a gold or bronze colour finish, but the Broadwood colour of the time was a dark brown. 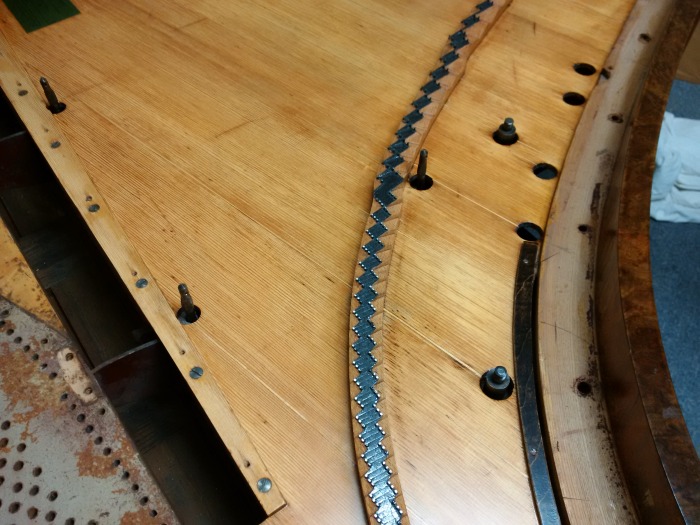 The top of the bridge is carefully coated in graphite and burnished shiny, and nosebolts returned to their homes, ready to support the plate.